The numbers compared against a 7.9 percent on-year rise in exports in January and a 16.7 percent rise in imports.

China ended up with a rare trade deficit of $9.15 billion for February - the first since February 2014 - the General Administration of Customs said. In January, China recorded a trade surplus of $51.35 billion.

Analysts cautioned that data in January and February can be distorted by the week-long Lunar New Year public holidays, with business slowing down ahead of time and many firms scaling back operations or closing. The holiday fell on January 28 this year, 11 days earlier than last year. 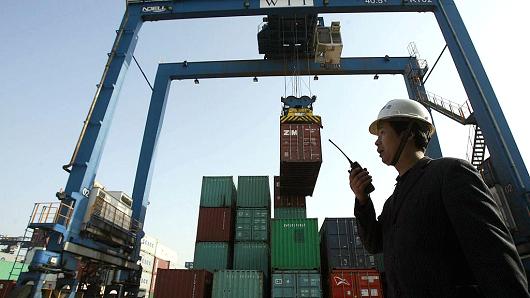 "We suspect that this largely reflects the boost to import values from the recent jump in commodity price inflation, but it also suggests that domestic demand remains resilient," Julian Evans-Pritchard at Capital Economics said in a note.

"Looking ahead, we expect external demand to remain fairly strong during the coming quarters which should continue to support exports."

China's shipments to the U.S. rose 11.5 percent in February in yuan terms from a year earlier. Its imports from the U.S. rose 41.0 percent.

China, the world's second largest economy, could be badly impacted by protectionist measures this year if President-elect Donald Trump follows through on campaign pledges to brand it a currency manipulator and impose heavy tariffs on imports into the U.S.

"Our estimate is that a 10 percent tariff on China goods would equate to about a 25 percent drop in exports from China to the U.S. That's a big number and that would certainly have a ripple effect on the global economy," Modern Terminals Group managing director Peter Levesque told CNBC.

Get In Touch With Us